Indiana’s venture capital investment in the first half of 2021 exceeded annual totals of both 2019 and 2020, according to the 1H 2021 Indiana Venture Report released today by Elevate Ventures. 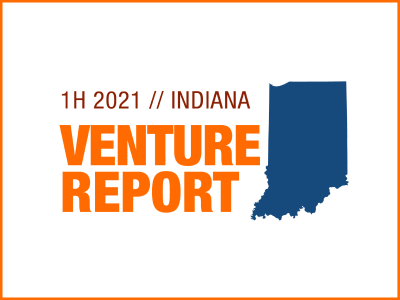 Venture capital investment in the state increased 302% compared to the first half of 2020, from $176 million to $708 million. Much of the activity can be attributed to a surge in later-stage deals (greater than $10 million), with 10 occurring in the first half of 2021, up from four during the same period in 2020.

The rise in later-stage deal activity was driven by an influx of out-of-state investment and pent-up demand from the post-pandemic recovery.

“Indiana’s strong start to 2021 indicates a substantial recovery following the pandemic,” said Elevate Ventures CEO Chris LaMothe. “Our state has emerged as a significant player in the regional and national venture capital industry, and we anticipate more success in our continued efforts to support innovation and drive economic growth.”

Other findings in the report include:

The 1H 2021 Indiana Venture Report provides a mid-year assessment of venture investment activity in Indiana. While the majority of venture capital activity in the state focuses on technology, the report includes all sectors. New to the report this year is a special feature on diverse investors and founders of venture-backed companies across Indiana.