“Purdue has a 150-year history of producing world-class research.  Five years ago we set out to establish an equally strong commercialization ecosystem to ramp up the translation of this research into the market and into real-world solutions,” Purdue University President Mitch Daniels said. “These efforts are clearly beginning to bear fruit, and to encourage us that these gains are just a beginning.” 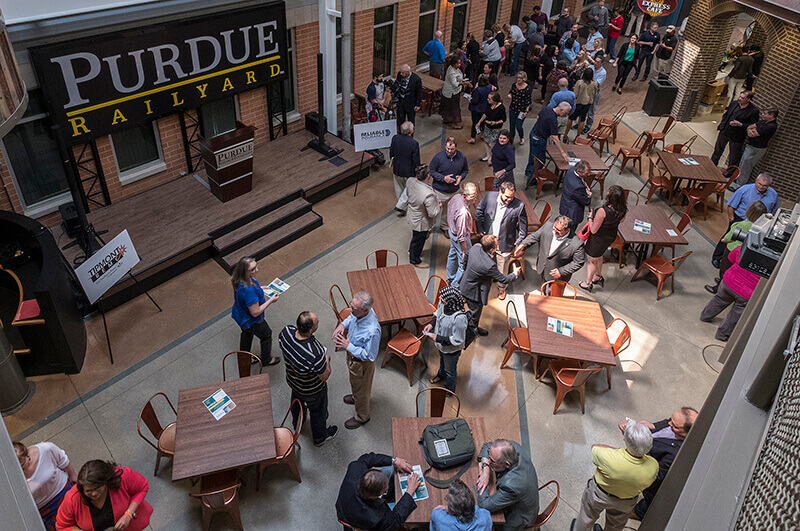 Entrepreneurs and investors gather at a startup networking event in the Purdue Railyard, which is one of the largest co-working spaces in the Midwest. (Oren Darling/Purdue Research Foundation) Download image

“West Lafayette truly is ‘Startup City,’” West Lafayette Mayor John Dennis said. “The strong pipeline of innovation and entrepreneurial support from Purdue along with the economic environment climate here and across the Greater Lafayette area equate to new technologies, new companies and new jobs across the board.”

The 223 Purdue licensed-IP startups or startups affiliated with Purdue:

The startups originated from 10 of Purdue’s colleges — the colleges of Agriculture, Education, Engineering, Health and Human Sciences, Liberal Arts, Science, Veterinary Medicine and Pharmacy, as well as Krannert School of Management and Purdue Polytechnic Institute.

Major international companies have acquired nine of Purdue’s startups for a total of more than $2.3 billion for strength of technology and business potential. Those companies include:

“It’s not a single entity, but a movement across campus built upon Purdue’s very rich pipeline of cutting-edge technologies and the commitment that the people at Purdue have to serving its land-grant mission,” said Greg Deason, senior vice president of entrepreneurship and placemaking. “It is amazing to be part of such a dynamic movement of turning ideas into true global impact.” 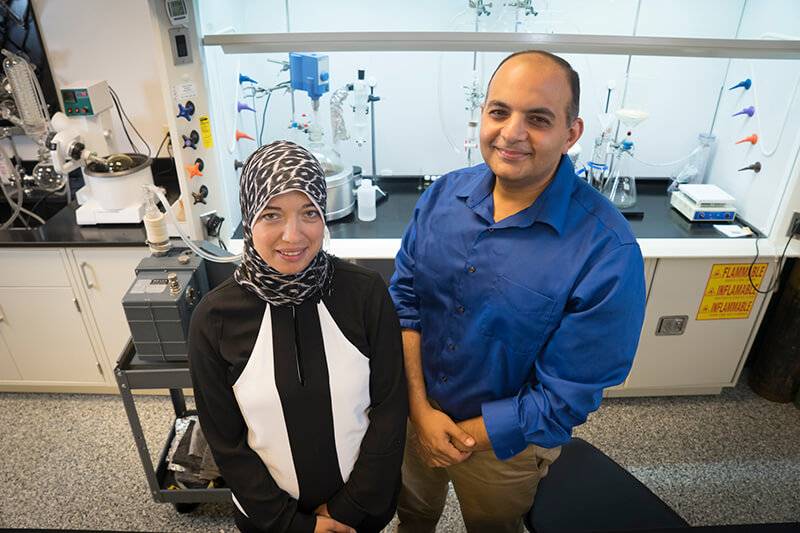 A cornerstone in Purdue’s entrepreneurial ecosystem is the Purdue Foundry, a startup accelerator established in 2013 that provides a “one-stop shop” for Purdue faculty, staff and students interested in creating a startup. The Purdue Foundry is based in the Burton D. Morgan Center for Entrepreneurship in Purdue’s Discovery Park.

The Purdue Foundry has provided startup assistance to nearly 500 entrepreneurs in the past five years. Akanocure Chemicals co-founders Philip Fuchs, Sherine Abdelmawla, Mohammad Noshi and Philip Fuchs received startup support from the Foundry even before officially founding their startup.

“We are trained scientists and entering the entrepreneurial world was daunting, but something we very much wanted to do,” Abdelmaula said. “The support we received from the Purdue Foundry and Office of Technology Commercialization has been invaluable. We would not be where we are today without their support and guidance.”

Akanocure has received NSF Small Business Innovation Research, or SBIR, grants and been part of the FOUNDER.org (class of 2016) and MassChallenge (class of 2017), where it received funds from both programs. It also received funding from Elevate Ventures, Purdue Ventures, and private angel investors to conclude its seed round at $750,000, including the current NSF grant funding.

Another startup that received entrepreneurial support through the Purdue Foundry is Heliponix, co-founded by Purdue Polytechnic Institute alumni Scott Massey and Ivan Ball while they were undergraduates at Purdue. Their technology uses a fully automated aeroponic appliance that can grow clean produce using an in-home greenhouse that creates perfect climate conditions for a variety of crops, including spinach, cilantro, arugula and among others. Click here to view a video about Heliponix.

The startup just received $50,000 through the Purdue Ag-celerator program that provides funding for plant sciences startups.

“We’ve traveled to Africa to help establish programs to grow garden vegetables year-round and to lead a hands-on workshop to help residents of Togo, a small West African country, create sustainable agriculture methods, with a second trip planned for Cameroon Africa,” Massey said. “We wouldn’t have done any of this without Purdue and its assistance and resources.”

“The funding we’ve received through Purdue Ventures and the assistance from other Purdue startup resources gave us the foundation for Heliponix’s growth and success,” Massey said. “The funding from Purdue Ventures doesn’t end there because that funding opens the doors to other state and federal funding opportunities for startups. The Foundry guides us through this process.”

The entrepreneurial resources available through the Purdue Foundry, Purdue Office of Technology Commercialization and other Purdue programs include FireStarter, Trask Innovation Fund, Express License, Innovation and Entrepreneurship landing page,  Bechtel Innovation Design Center,  P3 Alliance, Ag-celerator, Purdue Ventures, Boilermaker Lab and the Anvil. A brochure developed to ease the commercialization and startup process by providing a high-level overview and guide for Purdue innovators and entrepreneurs is available at the Purdue Startup Guide.

The Purdue Foundry works closely with the Purdue Office of Technology Commercialization, which protects and licenses Purdue innovations. In fiscal year 2018, the office had a record-breaking number in issued patents with 128 utility patents issued from the U.S. Patent and Trademark Office. In the same year, the office signed 126 license and option agreements for a total of 215 technologies with startups and established companies.  Twenty-five of these license agreements were with startups created based on Purdue intellectual property.

Purdue’s technology commercialization also is ranked 17th in the world among universities granted U.S. utility patents in 2017, according to a new report released in 2018 by the National Academy of Inventors (NAI) and the Intellectual Property Owners Association (IPO).

Purdue also is tied for fifth for startup creation among universities reporting to the Association of Technology Managers (AUTM), the international governing body for technology transfer activities. The universities and their startup creation numbers are California System, 94; Texas System, 37; MIT, 29; Stanford University, 22; Purdue University, 21; Columbia University, 21. California and Texas include all academic research institutions in their respective states’ data as an entire system and not as individual institutions. This data report is from 2017, the most recent year available from the association.

“The entire Purdue team is working in unison to achieve real-world changes, and we can see those results in these numbers and in the positive energy around the campus,” said Brooke Beier, vice president of the Purdue Office of Technology Commercialization. “We anticipate that 2019 will culminate in similar record-breaking activities as we celebrate Purdue’s 150th celebration.”

The commercialization and entrepreneurial work aligns with Purdue’s Giant Leaps celebration, celebrating the global advancements in health as part of Purdue’s 150th anniversary. The yearlong event features four concentrations of research areas as part of the celebration’s Ideas Festival, designed to showcase Purdue as an intellectual center solving real-world issues.

The Purdue Research Foundation Office of Technology Commercialization operates one of the most comprehensive technology transfer programs among leading research universities in the United States. Services provided by this office support the economic development initiatives of Purdue University and benefit the university’s academic activities. The office is managed by the Purdue Research Foundation, which received the 2014 Incubator Network of the Year from the National Business Incubation Association for its work in entrepreneurship. For more information on licensing a Purdue innovation, contact the Office of Technology Commercialization at innovation@prf.org.